Once you’ve rung Flying Dutchman a few times, you’ll realise that it’s just the same ten rows repeated over and over. It’s time to find ourselves some more rows.

You’ll remember that Flying Dutchman begins with the 3rd lying still in 3rds place. This is called ‘making 3rds’. When we get to the end of our block of 10 changes, we do exactly the same thing: the bell in 3rds place makes 3rds (this time it’s the 5th) and we carry on plain hunting. 10 more true changes!

We do exactly the same at the end of the next block. This time, it’s the 4th who makes 3rds. After another 10 changes, the bells run into rounds. We have a true block of 30 changes. This block is called Grandsire Doubles. 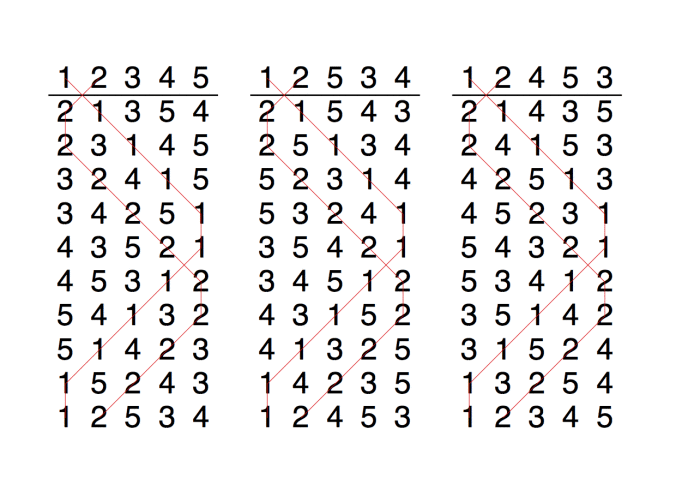 This large block of 30 changes consists of three smaller blocks of 10 changes. In each small block, the treble hunts from the front to the back and then back down to the front again. Each small block is called ‘a lead‘.

The large block is called a ‘Plain Course of Grandsire Doubles‘. You can vary Plain Courses to get still more changes. We’ll see a video of some ringers doing just that at the end of this section.

To sum up: the Plain Course of Grandsire Doubles consists of three leads, each 10 changes long. Each lead is just a lead of Plain Hunt, but with a bell making 3rds at the start of each lead.

The treble does exactly the same as it did in Flying Dutchman but, after the first lead, it follows the bells in a different order each time it hunts up and down. You’ll notice that the treble starts each of the three leads by ringing in 2nds place over the 2nd. That’s a big help, but how do you know in what order you pass the other bells?

You know the first lead already, and you know how to start the second lead: hold up and ring over the 2nd. To find the bell to follow next, you try to see (or hear) which bell is following you.

If you’ve successfully made it into thirds place, you’ll have to do the same to get up into 4ths place: look (or listen) for the bell that’s following you and then hold up over it. There’s even less choice than last time, because two bells are already in front of you. You’ve a choice of only two.

Once in 4ths place, there’s only one bell (apart from the tenor) left behind you, so that’s the one you’re going to follow.

To get back down to the front, you follow the same four bells in the same order.

The good news is that there’s only one lead left to ring, and it works just the same as the first two. Hold up over the 2nd into 2nds place, then pass 3, 4 and 5 in whatever order they come at you.

Graduating from Flying Dutchman to the plain course of Grandsire Doubles will take a bit of practice. It all happens pretty quickly, and there’s a whole load to think about all at once. Your teacher will give you all the help you need to master it. Get confident with it before moving on.

If you find all this quite easy, then you could try hunting the 2nd to the plain course. You might find that easy too! Remember that the 2nd starts each lead by leading. It then has to work out the order in which to pass 3, 4, and 5 before passing the treble at the back of the change. Just like the treble, the 2nd hunts back down over the other bells in the same order as it passed them on the way up. You can check that that’s the case by looking at the diagram.

Here’s a fun video to round off this section:

What, no sallies? This video shows six English ringers making a decent fist of ringing on an Italian style (Veronese) portable ring. Notice the huge headstocks above each bell. There are a few clashes, not least because the treble ‘double clappers’ from time to time, striking twice instead of once. You can hear the double clappering very clearly right at the begining, as the bells pull off. That’s the bell’s fault, not the ringer’s!

If you’re really sharp-eared, you’ll hear that the bells move out of the plain course at the end of the second lead and ring some changes you haven’t heard before. We’ll talk about that next time.