Around ninety ringers made the trip from the UK to the Eastern Pyrenees for the dedication on Sunday 29th September of the new Taylor 10 at St George's Anglican Church, Vernet-les-Bains. The service was presided over by Rt Rev Michael Langrish, Assistant Bishop of Europe, and the church was packed with a good mixture of French and British. Chris Kippin played the organ splendidly, sending us out into the sunshine with a rousing performance of Karg-Elert's Nun Danket.

Before the service, four touches were rung by invited bands: Durham University Society (Cartwheel Call-Changes on the Radlett (top) six), Cumberlands (Oxford TB Minor on the back six), Leeds University Society (Yorkshire S Major) and the College Youths (Stedman Caters). The first ringing on the newly-dedicated bells was (with a little assistance) rounds on 10 by the local band, followed by three courses of Grandsire Caters by Leeds Minster Society. Other ringing during the dedication week included practices for the local ringers, the first and second peals on the bells, three quarter peals, and, of course, lots of open ringing for our visitors. There was also a run'n'ring fundraiser in Yorkshire: Simon Kemp and Jonny Ladd ran the 6km from Silsden to Addingham and back, with a quarter of Cambridge Minor at each tower.

The dedication took place in the context of a two day festival, celebrating the bells and the Anglo-French Entente Cordiale. We were thrilled to have Wakefield Morris with us, who shared the limelight with a Catalan troupe, Maribel. There were costumed washerwomen and characters from the Belle Epoque. Two local choirs joined forces in concert. There was a garden party in the park, with cake and craft stalls, buvettes and fish and chips. There was a welcome by the Mayor (Henri Guitart), our Priest (David Phillips) and the Bishop, followed by handbells, dancing and apéritifs. There was an Irish evening in the bar and a tea dance in the Casino. Good use was made of the curry shop and the other restaurants. It was all enormous fun, and blessed with perfect weather. There are rumours that we might have to do it all again some time. 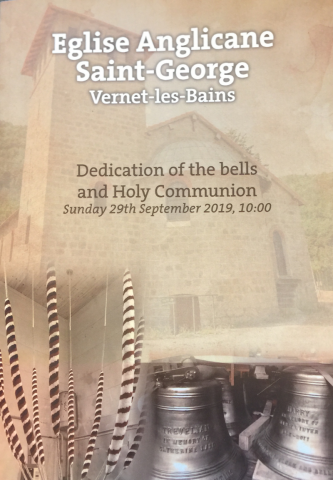 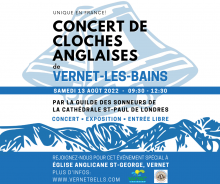