Here’s a nice large diagram of Plain Hunt on 6. You’ll find it useful to print it out: 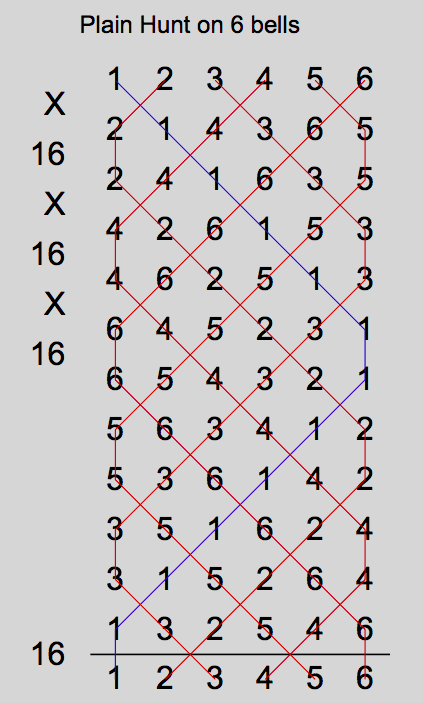 Before we try to ring it, there are lots of things to notice about Plain Hunt.

There are some figures, things like ‘X’ and ’16’, written at the side. You can ignore those for now, though if you look back at the previous lesson, you might be able to work out what they mean. Don't worry if not.

Each bell has a line drawn through it which helps you keep track of your position(s) in the row. You should be able to see that each bell’s line is the same, though they all start at different points upon it. Have a look at the line through the Treble (bell number 1).

What the treble does:

The treble moves from the front of the change to the back, one place at a time. So…

This is called hunting up.

When it reaches the back, it stays there for an extra blow (this is called lying behind), and then moves one place at a time back down to the front:

This is called hunting down.

It finishes with an extra blow at lead, making a normal whole pull of leading, handstroke and backstroke.

So what the treble does is this:

Check that this description makes sense alongside the diagram. It needs to, so please take a moment or two to make sure you understand what’s going on.

Did I mention the horrible fact that, unlike tower bells, where one bell is considered quite enough for one person to manage, on handbells you’ll be ringing two at once? A lot of tower bell ringers who try out handbells find it very hard because they try to split their brain into two halves, one for each bell. Ouch! Since we’re plunging straight into ringing two bells at once, we’re not going to do that. We’re going to focus instead on the way in which the positions of your two bells relate to each other in each row.

What the 2nd does

Now have a look at the line through the 2nd. It’s the same. Well, almost. The second starts by leading, then hunts up, lies behind and hunts down.

Now here’s the key thing: the 2nd just follows the treble around. If you know where one of your bells is (i.e. its position in the row) you should have a pretty good idea where the other one is. There is always just one bell between them, except when the bells cross, firstly at the front, then, 6 blows later, at the back.

The conductor says ‘Go’ at a handstroke of his or her choosing.

At the next handstroke, the ringing starts by you (and everyone else) crossing their bells over.

The 2nd leads again (at backstroke) while the treble moves up into 3rds place. Remember: the bells change position at every stroke!

Both bells hunt up, with one bell in between them, until the treble reaches the back. Focus on the position of the bell nearest the front (the 2nd) and then, leaving a gap for one bell to fit in, ring the treble. You will ring:

When the treble reaches the back (with the 2nd in 4ths place) it lies behind and the 2nd moves into 5ths place under it. Next you cross with yourself at the back. The 2nd lies behind as the treble moves down into 4ths place (so you now have one bell between you again).

Carry on hunting the treble down to the front, with the 2nd following it with a one bell gap.

When the treble reaches the front, you should have the 2nd in 3rds place. As the treble leads, the 2nd hunts back into 2nds place, and we’ve made it back to rounds.

Here’s a second diagram with the bell numbers much reduced in size: 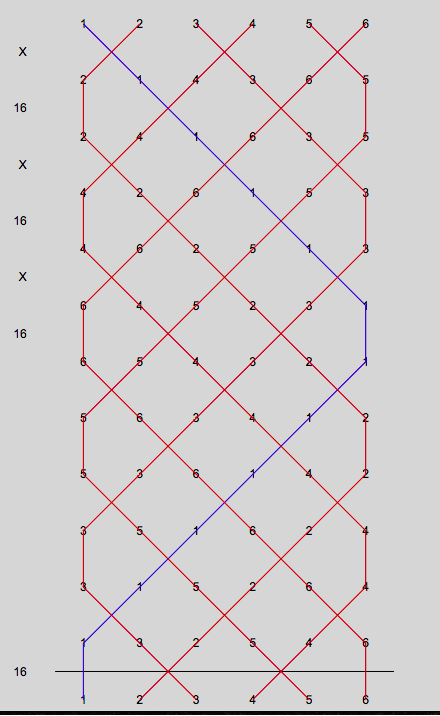 You can see the lines showing how the bells move through the changes much more clearly now. The path of the treble is highlighted in blue. The pattern the lines make is called the grid. Handbell ringers focus on the grid much more than tower bell ringers. Tower bell ringers tend to focus on ‘the line’ rather than ‘the grid’ because they are only tracking one bell. The down side of that is that a lot of tower bell ringers have precious little idea of what’s going on around them. Focussing on the line alone is a very one-dimensional approach to ringing and, ultimately, a very limiting one.

Check the description of what the trebles do with this new diagram, and, again, take time to make sure it makes sense. You don’t want to be still trying to grasp the theory while you’re trying this stuff out for real. Homework really does pay off.

Here’s what Plain Hunt on 6 tower bells sounds and looks like:

Plain hunt on 6 at Chesterton, Cambridgeshire.

You’re probably thinking ‘I can’t do that’.

For now, you’re probably right. I never said ringing changes in hand is easy. It’s going to take lots (and I mean lots) of practice and you will get lost, confused, throw down your bells in despair…..but don’t give up! You will get there.

To get you started, I reckon Plain Hunt on 6 is probably too hard unless you have a rock-steady supporting cast, so your first attempts will be Plain Hunt on 4 bells, with you on the trebles and your instructor on the tenors.

Quiz 4: Write out Plain Hunt on 4 (just 8 changes) and draw the lines through 1 and 2. You should find that the lines look very like plain hunt on 6. The big difference is that, on 4 bells, it takes hardly any time to hunt from the front to the back; you only have two blows between meeting and crossing with yourself at the back and meeting and crossing with yourself at the front. In a nutshell: it’s a lot easier!

On four bells, this is what the trebles do in Plain Hunt:

The bullet points make a nice little poem which you might like to try and memorise so that you can recite it at parties:

Warning: A lot of handbell conductors don’t bother saying ‘go’. They do what is called ‘up, down and off’. i.e. a whole pull of rounds and start at the next handstroke. Exactly like it says in the little poem above, in fact. The conductor should check in advance if that’s how you’re going to start by asking ‘Up, down and off?’ You nod sagely……

It’d probably be a good idea to make sure that your version of Plain Hunt on four, or Plain Hunt Minimus, to give it its posh name looks the same as mine: 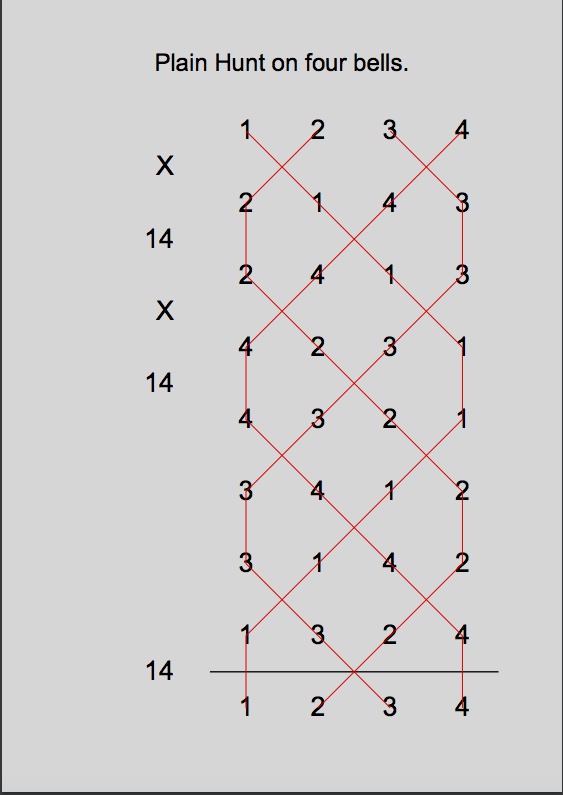 We first rang this at St George’s on Easter Day, 16th April 2017, to welcome the congregation to the morning service. Jeff and Richard rang Plain Hunt while Frankie dodged merrily with herself on the trebles. It was the first service ringing ever by a St George’s band! Given that we hadn’t seen each other for nearly a year, and had only one practice, it was a brilliant effort, and is recorded on BellBoard, where details of all significant ringing are published. You can view it by clicking on the link below:

Our ringing, as recorded on BellBoard