Once you can ring a Plain Course of Grandsire Doubles on the 3rd, it would be useful to try it on the 4th or 5th. There’s nothing new to learn. Notice that you get a dodge out of the way right at the start, so there’s only one more dodge and a set of 3rds left (not necessarily in that order!).

Have a look at the bobs only 60 we saw earlier. Here I’ve written it out just showing the lead heads, since we’re not particularly bothered to see all the plain-hunty bits in between: 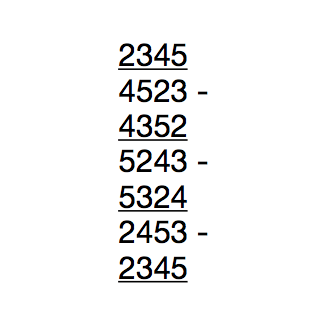 Notice that we don’t bother writing ‘1’ at the start of each lead head when doing this. We know that the treble is at the front of each of these rows, so there’s no point writing it; to do so wouldn’t tell us anything we didn’t already know.

You should be able to see that every two leads, the third comes back to thirds place. That’s the bell you’ll be ringing. Every two leads, you’re going to make 3rds, just like you did at the start of the plain course. That just leads the odd-numbered leads. At the start of all of those, the 3rd is in 5ths place. That means you’ll be doing something dodgy (in fact, the same dodgy thing) every time there’s a bob. Remember that the bobbed leads are indicated by a ‘-‘.

What is this dodgy thing you need to do?

It’s time to look at the line. Here’s a touch of 20 changes (bb), so you can see what happens at the bobs: 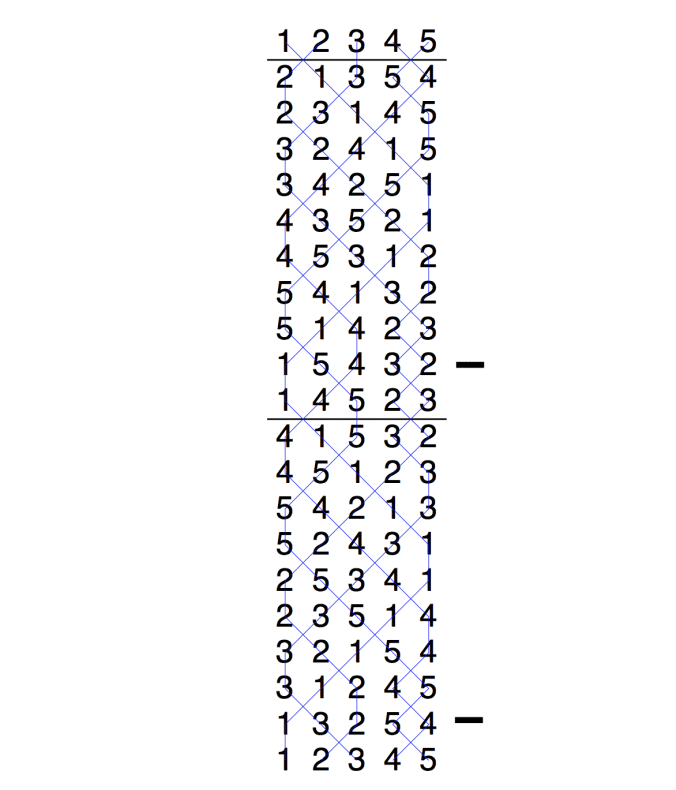 Remember that, at a bob, two lots of  thirds are made, one just as the treble leaves the front, and an extra one for the bob, just as the treble leads. That means that, for 6 rows, the bells in 4ths and 5ths place can’t get down to the front. They’d hit the two bells making 3rds if they tried. All they can do is to stay at the back until all those 3rds are finished.

They could just lie still, but that would be very dull, so, instead, they dodge with each other. 6 rows is enough time to dodge twice, so that’s what those two bells do: they double dodge with each other. You can see the 2nd and your bell, the 3rd, doing exactly that at the first bob, just like you’re going to do when you ring your 60. Hopefully, you can see that the 2nd is double-dodging down, and the 3rd is double dodging-up. That means you’ll need to cut not just one, but two handstrokes back into 4ths place before lying behind.

Now, you could try just remembering the order of the work for your 60: 3rds, double-dodge 4-5 up. That’s simple enough. However, if you remember how Grandsire works, there’s really no need. You have just two pieces of work to do, and you’re warned of each of them by a massive clue.

Most people try to learn the bobs in Grandsire by trying to remember lots of rules along the lines of ‘I was going to do this, but a bob has been called, so now I have to do that instead.’ It’s very easy to muddle up rules like that, so I wouldn’t try and do it that way. Instead, remember what happens at a bob: the working bells in 3rds place and below make 3rds, and the bells at the back double-dodge. So, when you hear a bob in Grandsire, just see what position you’re in at the following handstroke:

These two simple rules, based on understanding how the method works, apply to Grandsire Triples, Caters and Cinques as well.

Once you can ring a 60 observation, you can ring 120 as well, because the singles are the same as the bobs for everyone except the bells in 2nds and 3rds place. For the time being, you don’t need to think about the difference between a bob and a single. The double dodging at the back is identical for each.

Finally, when you can ring 3rd observation, try ringing 5th observation. It’s the same touch as before, alternating bobs and plain leads, but starting with the plain lead instead. Touches of Grandsire Doubles with the 2nd or 4th as observation don’t exist. You might like to think about why not.