Once you're trebling confidently to Doubles (there's no rush!) and you've hunted the 2nd to a few plain courses of Grandsire, it's time to think about ringing Grandsire Doubles on a working bell: the 3rd. The ropesight's a bit different on the 3rd. You have to watch two bells on either side of you so, before having a go at Grandsire, just ring a few leads of Plain Hunt on 5 to get used to that.

You already know a lot about Grandsire if you've got this far. Let's put that knowledge to work. We know that:

Here's what you've been waiting patiently for: a diagram of Grandsire Doubles, with your work on 3rd shown by a nice clear 'blue line'. The treble is shown, as is customary, in red, so you can see how your work relates to what the treble is doing. 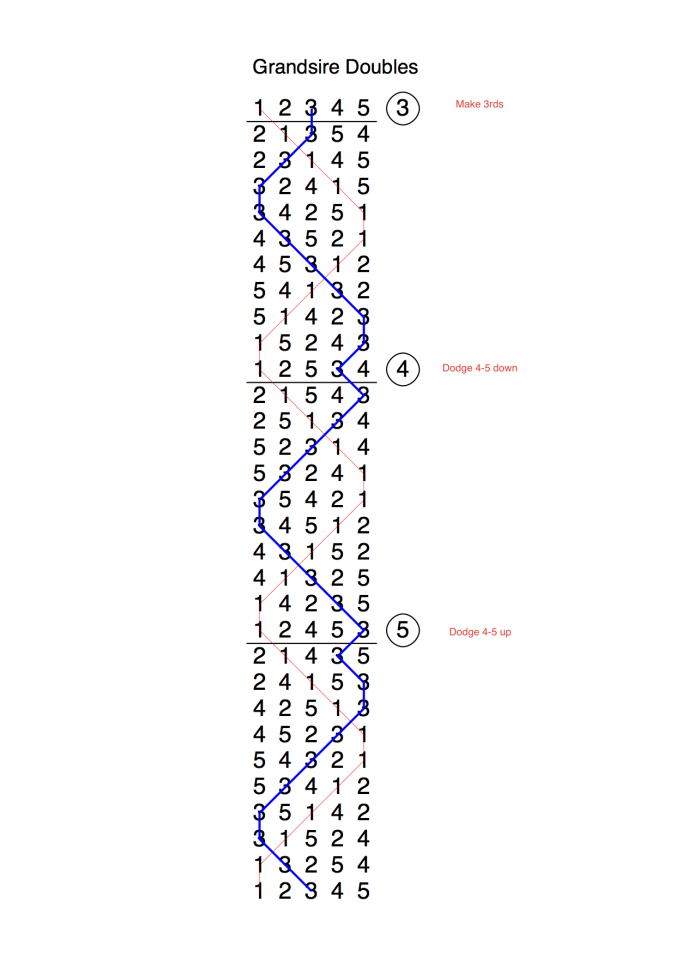 For the moment, ignore the numbers in the circles at the start of each lead. Let’s focus on what the 3rd does. There are three ‘pieces of work‘. They are shown in red on the diagram, and are listed here:

Let’s look carefully at the dodges. A dodge is simply a step back in the opposite direction to the way you’re going. All the dodges in Grandsire happen at handstroke.

The first dodge is a 4-5 down dodge. It’s called a down dodge because you do it as you are hunting down to the front. This is what you do:

The second dodge is a 4-5 up dodge. It’s called an up dodge because you do it as you are hunting up to the back. This is what you do:

After this second dodge, you should find yourself in a familiar lead of Plain Hunt. The bells run round at the next lead end.

Nobody expects you to remember these ‘blow by blow’ instructions for doing a dodge. They are just a description of what you do. The important thing is to match up the instructions with what the blue line shows you. If you can do that, and keep a picture of the blue line in your mind, with a bit of practice and some help from your teacher, you’ll be fine.

Most people learn the order of the three pieces of work (3rds, 4-5 down, 4-5 up), so you should probably do that. There’s not that much to remember! In fact, all three working bells do the same work in the same order, but starting in different positions. That’s what those big numbers in circles are for. They show you that:

Once you can ring the 3rd to a plain course, ringing the 4th or 5th is no harder. You just start in a different place.

All the time you are ringing the 3rd, keep an eye, or an ear, or both, on the treble, and remember that until you see or hear the treble leading, all you do is Plain Hunt. As the treble leaves the front, there is just one blow of work (either make 3rds or dodge in 4-5), and then you carry on plain hunting.

You can get better at seeing and hearing the treble by watching it, or listening to it with your eyes shut, any time you’re sitting out. Just make sure that it’s a plain method that’s being rung. The treble does something different in methods like Stedman, Kent and Cambridge.

Finally, some things to look out for which should help you: