Once you can treble to a plain course of Grandsire Doubles, you can have a go at trebling to pretty much any Doubles method.

‘Doubles’ is the name given to any method rung on 5 bells. You can ring Grandsire on any number of bells, although it is rung very much more on odd numbers of bells rather than even numbers. Grandsire Triples, for instance, is Grandsire rung on 7 bells, plus the tenor ringing behind (covering). If you’re feeling keen, you could try writing out a plain course of Grandsire Triples. It works in exactly the same way as Grandsire Doubles, with a bell making thirds at the start of each lead. If you write it out correctly, you should end up with five leads of 14 changes, ending with rounds. Well done if you managed that.

You’ll notice that Grandsire Doubles and (if you wrote it out) Grandsire Triples both have two bells which plain hunt all the time: the treble and the second. These are called ‘hunt bells‘. The other bells all do something a bit more complicated. They are called ‘working bells. Grandsire Doubles has three working bells (3,4 & 5) and Grandsire Triples has five (3,4,5,6 & 7). Notice that the number of working bells in a method is always the same as the number of leads in the plain course.

Because it has two hunt bells, Grandsire is an example of a ‘twin hunt method‘. In fact, it’s the only commonly rung twin hunt method, though you might come across a band ringing Oxford Bob Triples or Double Norwich Court Bob Caters. These are both good twin hunt methods, but generally regarded as old-fashioned. Old people like me enjoy them. By the way, Caters is the name given to any ringing on 9 bells, plus the tenor covering.

Anyway, it’s time to do some more ringing. Most people seem to think that Plain Bob is a good method to ring. Personally, I don’t (I’ll explain why some day), but you’ll almost certainly get the opportunity to treble to Plain Bob Doubles, (known as ‘Bob Doubles’ for short).

Plain Bob works like this: everybody starts with a full lead of Plain Hunt. Normally that would run round after 10 changes. To stop it running round, the bell in 2nds place (that’s the 3rd at the end of the first lead) makes 2nds over the treble and the bell in 5ths place lies behind. You do that three more times, and you end up with a plain course of Bob Doubles, 4 leads long. Notice that, in Bob Doubles, there is only one hunt bell (the treble) and there are 4 working bells, as you’d expect for a 4-lead plain course. Here’s the diagram: 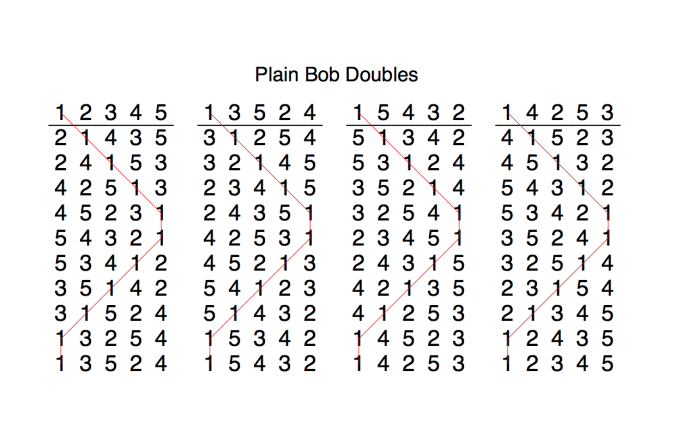 The only difference between trebling to plain courses of Grandsire Doubles and Plain Bob Doubles is that you need rather better ropesight. There’s one more working bell to keep an eye on, and each lead doesn’t start with you holding up over the 2nd. However, there’s a very helpful feature of Plain Bob: the bell you start each lead with may not be the 2nd, but it is always the one with which you finished the previous lead. Look at the first lead. The last bell you follow on the way into the front is the 3rd, so that’s the one you’ll hold up over to get the next lead underway.

Another useful feature of the plain course of Bob Doubles is that the first lead is identical to the third lead of Grandsire Doubles. In fact they are both just plain leads of Plain Hunt.

Notice that Plain Bob breaks the second of the two rules we started with: always swap as many pairs of bells as possible between rows. In Doubles that’s two pairs (which is why it’s called Doubles). When the treble is leading, you have a bell making 2nds, and you also have a bell making 5ths. Only one pair swaps, the pair in 3/4 (that’s a short and useful way of saying ‘the bells in 3rds and 4ts place’). Only having one pair swapping is a) naughty and b) interesting, for reasons I’ll explain some other day.

If you want some more challenging things to do:

Grandsire Triples at Bowdon in Cheshire.

I was privileged to ring my 1000th peal at Southwark Cathedral with my lovely friends from the Durham University Society. What a magnificent, old-style ring of 12. I love ’em!