If you can treble to Grandsire Doubles, sooner or later you’ll be asked to treble to Plain Bob Doubles, and you might then want to ring it ‘inside’. Let’s find out what it is.

Like Grandsire, Plain Bob is just Plain Hunt with the occasional tweak. In Grandsire, the tweak happens at the start of the lead; in Plain Bob, it happens at the end. Plain Bob Doubles starts with a full lead of Plain Hunt then, at the very last change (the lead end), to stop it coming back into rounds, a bell makes 2nds over the treble, the bells in 3-4 dodge, and the bell in 5ths stays put. This brings up the row 13524. If you do this three more times, the bells run round, giving a plain course of 40 rows, each 10 rows long. Here’s a diagram: 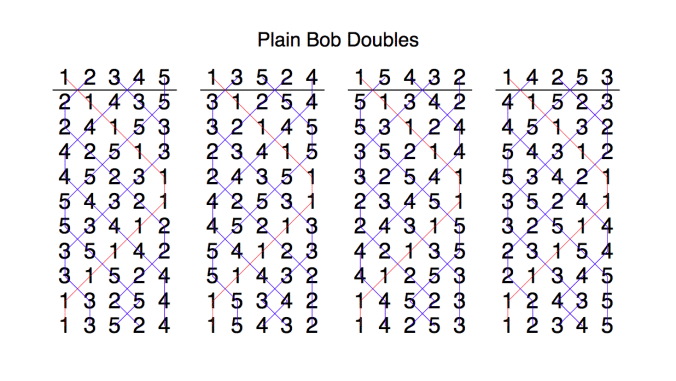 The fact that, at the lead end, bells lie still in both 2nds and 5ths has an interesting effect: it alters the nature of the rows, because only one pair of bells swaps at the lead-end (the pair dodging in 3-4). Consequently, the second lead of the plain course contains only out-of-course-rows. The same happens at the end of the second lead, so the rows change back to being in-course. You should be able to see that the fourth lead will again be out-of-course.

In the plain course of Bob Doubles then, 20 of the rows are in-course and the other 20 are out-of-course. You might therefore guess that the extent of Plain Bob Doubles doesn’t need any singles, and you’d be right: it only needs bobs. In fact, producing a 120 of Bob Doubles is very straightforward. At the end of the course, instead of a bell making 2nds, a bell makes 4ths, bringing up the row 14235. The whole thing is repeated twice, running round after 120 rows.

Plain Bob is the simplest of the huge number of methods which have a 2nds place lead end and a 4ths place bob. If you’ve trebled to Bob Doubles, you’ve probably noticed the bell making 2nds over you every time you lead, except when a bob was called.

Here’s the extent described above: 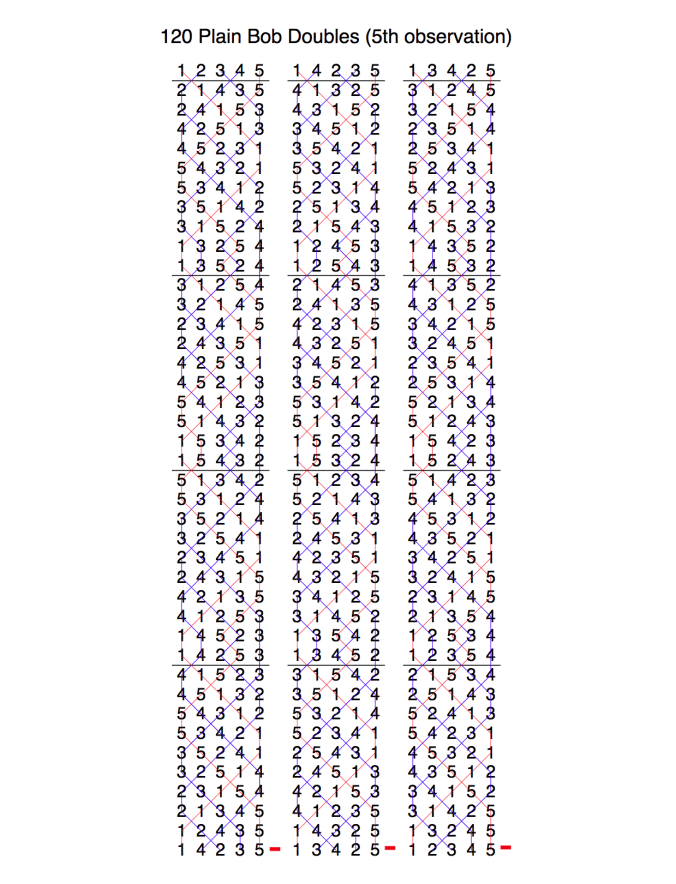 Because the extent of Bob Doubles is a round block, the three bobs can be called at any three lead ends 40 changes (4 leads) apart. The extent shown above has the 5th as observation, and has bobs at the 4th, 8th and 12th lead ends. The 5th simply rings three plain courses and is unaffected by the bobs. Any of the other three bells may be called to be observation bell. You simply call a bob each time your choice of observation bell is at the back as the treble is leading. For instance, to call the 2nd observation you would need bobs at the 2nd, 6th and 10th lead ends. A useful exercise would be to write out an extent of Bob Doubles with either 2, 3 or 4 as the observation bell.

We’ll think about how to ring Bob Doubles soon, but before we do that. we're going to talk about ropesight, the skill which ringers develop to help them see their way around a method. To help with that, we're also going to learn about coursing order. 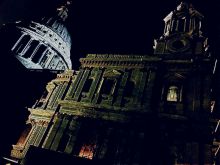